From Spice Girls to solo careers to David Beckham’s wife to fashion icon to fashion designer, Victoria Beckham has undergone various transitions under the celebrity spotlight. Now she has even introduced her son, Romeo Beckham, to the world of modelling. He appears in the SS13 Burberry campaign, w...

Posted By Victoria Arpels, In Fashion 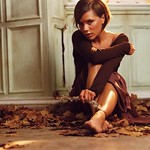 From Spice Girls to solo careers to David Beckham’s wife to fashion icon to fashion designer, Victoria Beckham has undergone various transitions under the celebrity spotlight. Now she has even introduced her son, Romeo Beckham, to the world of modelling. He appears in the SS13 Burberry campaign, wearing a classic Burberry Mac. Victoria, however, was not to let the apple of her eye steal the show as she has just announced that she will be launching her very own online fashion store in February 2013.

She will be completely revamping her current domain, victoriabeckham.com, using it as the base to sell her in-demand clothes online. On top of this her fresh site will contain exclusive video footage and a regularly updated news feed, keeping readers up-to-date with the latest happenings. The label has already garnered much support and buyers will be able to purchase denim and accessories from the e-commerce site. Her ready-to-wear line will remain only for in store purchasing, though.

Where for Art Thou?

Dropping down a Beckham generation and we find second-eldest child, Romeo Beckham, making his own waves in the celebrity fashion world. The 10-year-old recently starred in a celebrity-studded Burberry Spring 2013 ad campaign. Burberry has always been at the forefront of finding fresh talent and for the spring campaign they looked to all corners of the UK for emerging talent to show off their garments.

Romeo Beckham was clearly from the most well renowned stock, but he was joined by several noteworthy young-guns. These included seasoned Burberry faces, Cara Delevingne and Edie Campbell. Joining them under the flash were youngsters, Charlotte Wiggins, Alex Dunstan, Max Rendell and Charlie France, along with Romeo Beckham. Each shot was immaculately crafted by skilled photographer, Mario Testino, and the Creative Director of Burberry, Christopher Bailey, expressed how much fun they all had on the set.

The shoot has not gone without controversy, though. Alexandra Shulman, British Vogue editor was not impressed at especially Romeo Beckham’s inclusion as she expressed that under Vogue’s code, children under 16 years of age should not be engaged in such campaigns. Romeo is not however the only “underage” celeb offspring to have appeared in similar campaigns. Cindy Crawford’s daughter, Kaia Jordan Gerber, comes to mind. The tween was signed to Versace at the barely double-digits age of 10-years.

There will always be arguments as to whether children should be permitted to pose in fashion campaigns and appear in related magazines, but either way, Romeo Beckham and mother, Victoria have quite possibly just become the most famous mother-child fashion personalities.

If you’re looking for an experienced writer on all things fashion, look no further than Dave Peterson. Although his wife might not agree that Dave practices what he preaches, he certainly does have a knack for identifying what’s hot or not in a multitude of fashion zones, from womens sweaters to men’s scarves.